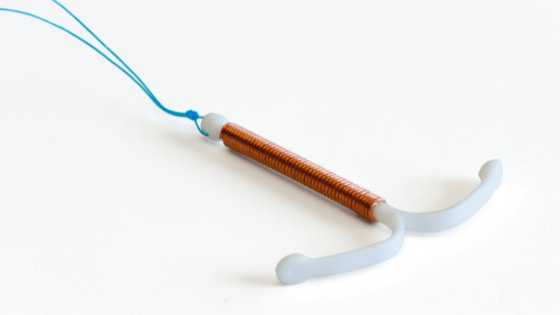 The pill, the patch, the ring, shots, implants, condoms, diaphragms, surgery… oh my. It can be overwhelming to decide which form of birth control is right for you.

One of the most effective forms of birth control that have been used for decades are intrauterine devices (aka IUDs). They’re over 99% effective… which is more than condoms or the birth control pill.

But like every form of birth control, IUDs have their side effects. Let’s explore the world of IUDs in more detail in this blog post.

What Is an IUD?

An IUD, or intrauterine device, is a T-shaped plastic device that’s placed inside of your uterus to prevent pregnancy. Once your doctor places the IUD it stays effective for years. However, the exact length of time depends on the type of IUD that you get.

IUDs have thin plastic strings attached to the bottom of the T that make it easy for the doctor to remove when you want to get pregnant.

Let’s look at the two types of IUDs that are commonly used.

What Are the Two Types of IUD Birth Control?

The two types of IUD birth control are hormonal IUDs and the copper IUD.

The copper IUD is under the brand name ParaGard. They’re T-shaped plastic devices with copper wrapped around them and are effective for 10-12 years. If you’re concerned about hormonal birth control, copper IUDs may be a good option. They’re the ONLY non-hormonal IUD available in the United States and Canada.

Hormonal IUDs are advertised as Mirena, Kyleena, Liletta, and Skyla. They’re T-shaped plastic devices that contain the hormone progestin, a hormone similar to the progesterone your body makes. They’re effective for 3-7 years. If you haven’t had kids yet, many doctors recommend Skyla because it releases a smaller amount of progestin hormone compared to Mirena, Kyleena, and Liletta.

How Does the Copper IUD Prevent Pregnancy?

The copper IUD, aka ParaGard, works because sperm don’t like copper. So ParaGard works by preventing sperm from swimming up to the egg. Copper produces a safe reaction in your uterus that makes it impossible for sperm to survive once they reach your uterus.

While you don’t have to worry about hormones when it comes to the copper IUD, they do come with side effects. I’ll talk about them after describing how hormonal IUDs work.

How Do Hormonal IUDs Prevent Pregnancy?

Hormonal IUDs work by releasing a specific amount of progestin – the amount depends on the type of IUD that you have inserted. They prevent pregnancy by:

Now, not all women on the IUD stop ovulating. Also, while IUDs are a very effective form of birth control, they come with their side effects and risks.

What Are the Side Effects of Using an IUD for Birth Control?

Intrauterine devices had a bad reputation in the 20th century because some would cause pelvic inflammatory disease (PID). Some first generations of IUDs also caused bacterial infections, while others would pierce the uterus and migrate to other parts of the body. But, after decades of research, scientists were able to develop IUDs without these side effects.

3 Side Effects of Hormonal IUDs

Women who take birth control experience depression at a higher rate than those who don’t. The most common side effect of hormonal birth control is changes in mood.

Side effects of hormonal IUDs are different from person to person. Women have reported:

While more research needs to be done, doctors found that women on hormonal contraceptives experience a 20% higher risk of breast cancer than those who took or used a non-hormonal form of contraception.

3 Side Effects of Copper IUDs

Women who use copper IUDs are able to track their periods with their actual cycle since they’re still ovulating. However, women have reported heavy and painful periods.

A copper IUD may not be a good choice for women who are already experiencing heavy and painful periods or for women with anemia. It may help to take an iron supplement if you experience heavy periods with a copper IUD.

Cramping can occur when you first get your copper IUD inserted. You can also experience cramping while you’re on your period with the copper IUD.

While extremely rare, some women experienced high blood copper levels after using a copper IUD. Some women may also experience an allergic reaction to copper.

If you have Wilson’s disease or other conditions where copper accumulates in your body, doctors recommend that you don’t use a copper IUD.

What Are Other Concerns of Using an IUD?

While these concerns are rare, they can happen if you have a hormonal or copper IUD inserted.

Women can experience PID because hormonal and copper IUDs don’t protect against sexually transmitted infections (STIs). PIDs are infections of the ovaries, uterus, and/or fallopian tubes due to an STI.

While the risks are low, it’s possible for the IUD to leave your uterus. If this happens, you may experience cramping, heavy bleeding, or new/abnormal vaginal discharge. Your doctor can run an ultrasound to see where the IUD is located.

Just like IUD expulsion, the risk that your IUD can move and break through your uterus is rare. It’s extremely painful, and you may need surgery to take it out. It’s a serious complication because it could lead to infection.

If you’re feeling extreme pain, bloating, fatigue, or fever, be sure to see your doctor to make sure you’re not experiencing one of these major concerns.

Do You Have Questions About Using an IUD for Birth Control?

While side effects are common with all forms of birth control, I hope you’re empowered and know that you have the choice when it comes to what birth control to take.

If you’re struggling with side effects from your birth control then contraceptive options used in naturopathic medicine, like IUDs, may be the right fit for you.

If you want to work with a doctor to discuss your options, we’re currently accepting new patients at Wild Side Wellness! You can contact us at [email protected] or call us at 519-400-4520 to schedule a consultation appointment.

Here’s to a healthy and empowered sex life,