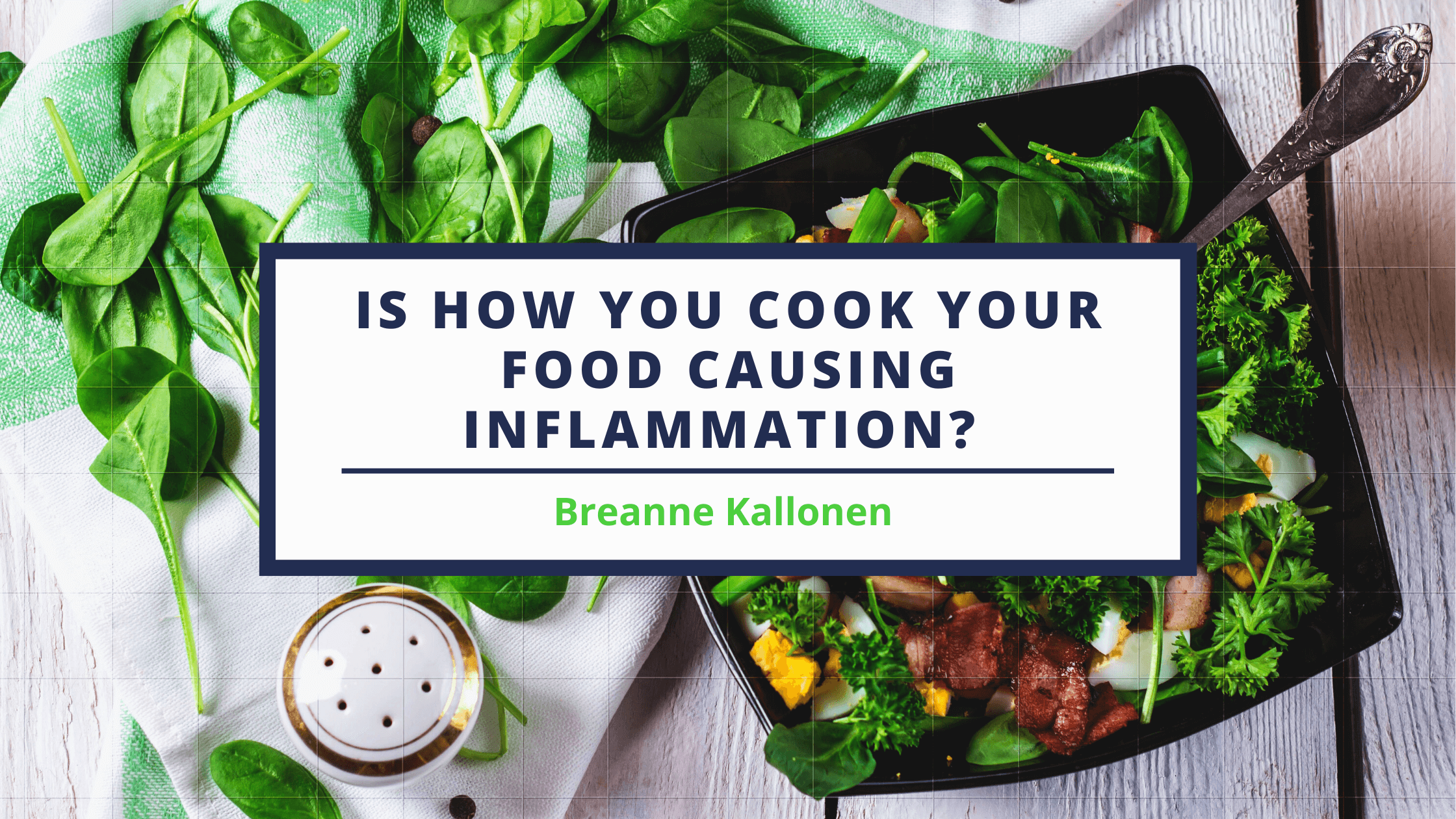 Not only do we need to consider which foods we eat, when and why we eat them, but we need to look at HOW we COOK our foods.

It’s well-known that overeating and obesity can lead to insulin resistance, triggered by chronically elevated oxidative stress and chronic inflammation. Recent evidence has found that excessive consumption of advanced glycation end products (AGEs), harmful compounds that stem from cooking foods at high temperatures and accumulate in the body as people age, are a major cause of this inflammation that can increase the risk of insulin resistance and type 2 diabetes.

Dietary interventions that reduce the consumption of foods high in AGEs, which are common in the standard Western diet, can be effective in helping prevent these metabolic disorders (obesity, type 2 diabetes, high cholesterol).

AGEs naturally form inside the body when proteins or fats combine with sugars (glycation). This affects the normal function of cells, making them more susceptible to damage and premature aging. AGEs are particularly high in animal-derived foods that are high in fat and protein, such as meats (especially red meats), which are prone to AGE formation through cooking.

Now this is worse in conventional red meats vs grassfed meats because grassfed meats are richer in protective oils vs inflammatory oils. To reduce AGEs in meats simply coat your meats in something acidic like wine, vinegar, or lemon juice.

Sugary foods and highly processed and prepackaged products also are high in AGEs. Cooking methods that use high temperatures to brown or char foods, such as grilling, roasting, and broiling, have the largest impact on the amount of AGEs consumed. For overall health get in the habit of using both wet and dry heating methods.

The body naturally rids itself of harmful AGE compounds, but it doesn’t eliminate them effectively when too many are ingested through food. All of the body’s cells are affected by the accumulation of AGEs, which not only have been linked to aging but also the development or worsening of many chronic illnesses, such as cardiovascular, liver, and Alzheimer’s diseases.

This is why it’s so important to detox and why we use detoxification support, in my Metabolic Reset Program, as well as emphasize cruciferous vegetables and consuming additional amino acids. In both the maintenance & losing portions of the Metabolic Reset program we encourage sweating. In the losing phase even though we recommend reducing or removing exercise you can still sweat by using sauna therapy or a hot Epson Salt bath. Sweating is beneficial because our skin is the biggest detox organ.

To reduce AGE consumption, eating foods that contain low AGE levels is key to decreasing the risk of insulin resistance and type 2 diabetes. I believe strongly that dietary restriction of AGEs are of tremendous importance. There is extensive research on AGEs and their effects on diabetes patients.

According to one study, published in the July 2011 issue of Diabetes Care, states AGE consumption may contribute to insulin resistance in type 2 diabetes, and restricting AGE foods may help preserve the body’s natural defenses against insulin resistance by preventing the development of oxidative stress. In the study, two groups of diabetes patients following the recommended standard of care for diabetes were randomized to either a high- or low-AGE diet. The results of the group who ate a low AGE diet “went far and beyond those receiving standard care. The AGE-restricted diet improved insulin resistance in those individuals (1).

Another study published in the January issue of Current Diabetes Reports, showed that because AGEs are associated with oxidative stress, they’re of particular concern to patients with diabetes and prediabetes. The researchers found that subjects who consumed a meal with a high AGE content had an increased circulation of AGEs in the body, and that lowering dietary AGE intake could improve hyperinsulinemia by about 40% in type 2 diabetes patients. Excessive intake of AGEs as a potential cause of diabetes is “an area of major clinical relevance,” the study concluded (2).

The most effective way to reduce intake of foods high in AGEs is to modify cooking methods. In a study published in the June 2010 issue of the Journal of the American Dietetic Association, The researchers found a link between heat-processed foods and AGEs (3).

They compared different types of cooking methods and found that dry heat promoted AGE formation by more than 10- to 100-fold above uncooked foods in all food categories (3). Meats high in protein and fat  (this is why we use lean meats) were likely to form AGEs during cooking, while carbohydrate-rich foods such as fruits, vegetables, and whole grains maintained low AGE levels after cooking.

Foods cooked with moist heat, shorter cooking times and lower temperatures, and acidic ingredients such as vinegar or lemon juice produced the least amount of AGEs (3).

A Danish study published in the January issue of Diabetes Care (great article if you wish to learn more) showed that overweight women who ate foods cooked at high temperatures had much higher biological markers of insulin resistance compared with those who ate foods prepared by boiling or steaming.

Whether on the grill, in a skillet, or in the oven, browning or charring foods is an indication that AGEs are present. I suggest cooking foods with medium heat for an extra minute or two instead of using high heat.

Also use dutch ovens or slow cookers as less oil is needed in slow cookers, more nutrients are retained compared with many other cooking methods, and recipes tend to include more vegetables.

Next, eat more vegetables and fruits. This is another way to reduce AGE consumption. I cannot emphasize enough the importance of dietary phytonutrients, which are found in the pigments of various colourful fruits and vegetables.

One type of phytonutrient in particular, called iridoids, which are found in deeply coloured blueberries, cranberries, and blackberries. These can lower AGEs in the body (hence why in my Metabolic Reset Program I want a serving of fruit at each meal).

Finally SLEEP! People who are sleep deprived have higher circulating AGEs/ Sleep is the time when the body does most of its tissue growth and repair, making it better able to defend itself against AGEs. Sleep, daily activity, and stress reduction play important roles, along with diet, to reduce AGEs.

• Sugary items such as candy, cookies, cakes, soda, and pastries

• Fats, including butter, margarine, and oil

• Use a slow cooker

• Cook foods in water through boiling, steaming, or poaching

• Get the recommended seven to nine hours of sleep per night

• Exercise 150 minutes per week (movement and sweating not overtraining)

• Treat preexisting conditions such as obesity and high blood pressure